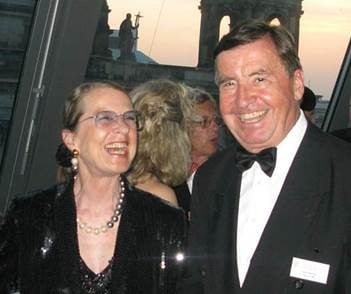 The Cornell Hotel Society grieves the loss of Rudolf W. “Rudy” Muenster ’62. Rudy passed the morning of September 29, 2020 peacefully with his wife Annelie by his side in Berchtesgaden, Germany.

Rudy was an icon and inspiration for Hotelies worldwide and a mentor to many. He was a tireless ambassador for Cornell and The Hotel School (SHA) and truly epitomised the Hotelie for Life® spirit. Based in Berlin, he worked extremely hard to advance CHS in the EMEA region and was instrumental in the transformation of a single EMEA Chapter to nine Chapters, thus widening the visibility of the school across two continents. He is credited as being the orignal driving force behind the EMEA scholarship program, as well as the traditional scholarship auction held during the gala dinner at the annual EMEA meetings. He devoted a tremendous amount of time to soliciting donations from industry suppliers, hotel companies, and chapter members. Over the years his efforts helped fund more than 300 scholarship recipients. It is planned to honour Rudy at the next EMEA meeting in Rome and name the existing GMP scholarship after him.

In 1995, Rudy participated and supported the fledgling and first ever Asia-Pacific Regional Annual Conference in Hong Kong attended by 17 participants at the then Furama Hotel under Past Global President Michael W. N. Chiu ‘66. The forerunner Asian-based Annual Conference was adapted in format from Michael’s prior participation in the Annual EMEA meetings. In 1996, Rudy served as the first non-American Global President. His motto was “Act local, Think global”.

Professionally, Rudy began his international hotelier career at the then InterContinental Hotel Indonesia in Jakarta and later became the General Manager of the group’s hotel in Hannover, Germany. He then went to work for Kempinski Hotels where he became a management board member at the young age of 39. When he turned 46, he founded his own consulting firm, RWM Hotel Consult, during which time he traveled over 200 days a year as a worldwide consultant to the hospitality and travel industry serving such prestigious clients as the World Bank. In his time, Rudy was also a pioneer in sales and marketing where he left a particular mark in the German hotel industry. Perhaps most of all, Rudy was an excellent connector and networker. The annual receptions that he and his wife hosted at their home in Berlin during the IHIF conference and ITB fair was a sought after invitation by Cornellians and international industry leaders alike.

After Rudy’s most unfortunate and severe head and spine injury suffered from a fall at the Bahnhof (train station) rushing to a business meeting in Berlin, he entered a care facility not far from his house in Berchtesgaden after first being cared for at his home for two years. In addition to Annelie’s most devoted daily attendance and routine at the facility (including delivering him home cooked meals), their very dear friends and former colleague, Hans Turnovszky, PDP ’67 and his wife Silke, were without fail looking into both Rudy and Annelie very regularly. Rudy was never again able to use the computer or telephone which he was so good at, nor was Annelie able to connect.

For more information regarding Rudy’s contributions to CHS, The Hotel School, and the global hospitality industry, please use the following link to read an article from the Winter 2019 edition of Hotelie magazine: https://redirect3.dailypoint.de/…/597_CHS_Germany_hotelie_f…

Rudy, with his signature smile and legacy of service to the CHS community, will forever remain in our hearts and minds.