The 2019 Annual CHS EMEA Regional Meeting was held in Cannes, France during early May. Hotelies explored the local areas, such as Grasse, Monte Carlo, and St. Honorat Island, and sampled foods and wines from the local region of Côtes d’Azur. The weekend also had some fantastic talks about leading and retaining talent with the new generation of hoteliers, led by SHA Professor Cathy Enz. And time was spent doing what Hotelies do best: networking! Many thanks to the speakers: Mr. …Jeffrey Scott ’91, Mr. Michel Chevillon, Professor Cathy Enz, and Dr. Demian Hodari ’96 for their wonderful contributions, and to Dean Kate Walsh for traveling to France to share in the experience. Most of all, thank you to all the attending alumni Hotelies who made this event a success! See you next year in Rome!

On February 2, 2018, the CHS France chapter joined alumni from other U.S. universities to celebrate Brazilian Happy Hour. The event was held in Restaurant Boteco in Paris.

In the photo, left to right:

Javier Cedillo Espin ‘00, CEO of onefinestay hosted the event in one of their fine properties in Paris on December 14, 2017.

We presented the new concept of red and white wines by the glass from D-Vine the first wine tasting machine that aerates and brings to the right temperature high quality wines in less than a minute. This technological innovation has been created in France by a young company called 10-Vins and has already won several awards. The food was sponsored by Les Bocaux du Bistrot: elected “Best Parisien Bistrot” in 2012, the team created small traditional dishes with local products, served in jars as our grand-parents did.

CHS France Joins Other US University Alumni to Celebrate the Holidays 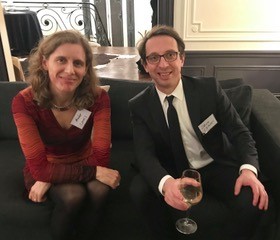 CHS France Joins Other US University Alumni to Celebrate the Holidays

On September 13, 2017 the CHS France Chapter hosted a private tour of the Hôtel de Crillon, A Rosewood Hotel.  The hotel went through a complete renovation during the past four years.  Tristan Auer, the interior designer of the public spaces, guided the tour.

On October 5, 2017, the CHS France Chapter had a great evening celebrating the Oktoberfest in Paris. The festivities were held at the Paris Event Center. 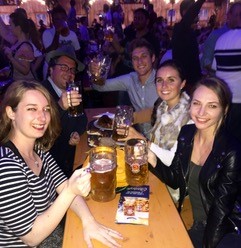 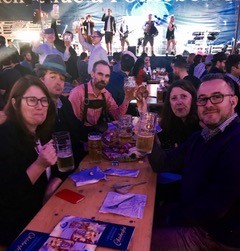 Hotelies in Paris gather for seminar on Measuring Design Success

Hotelies in Paris gather for seminar on Measuring Design Success