A glimpse into the past history of our organization and our direction for the future.

The Origin of the Cornell Hotel Society

The Cornell Society of Hotelmen, now known as the Cornell Hotel Society, is the alumni association of the School of Hotel Administration at Cornell University.  It has its inception in the early undergraduate years of the first classes and to develop the background of its origin calls for a bit of reminiscing.

In the fall of 1922, at the request of the American Hotel Association, and at the encouragement — and even the urging — of such leaders in the hotel business as Ellsworth Milton Statler, Frank A.  Dudley, John McFarlane Howie, Lucius M.  Boomer, Thomas D.  Green, and many others, Professor Howard Bagnall Meek came to Cornell to organize a curriculum of instruction of hotel management, which has now become the School of Hotel Administration.

The School had its birth in a little cubbyhole up under the eaves in Comstock Hall (then the Home Economics Building) where Prof.  Meek dispossessed some pigeons and cleaned out the cobwebs.  With a few old boxes and orange crates for office equipment, and with Lena Swartwood at a typewriter out in the hallway, he released the news that a high grade education in all matters relating to the management of hotel and was now available and called for volunteers to “come and get it.”

There were twenty three of us who enlisted under his banner that momentous September in 1922.  It was a precarious launching.  Undoubtedly Professor Meek kept his fingers crossed, because we must have been a motley crew.  From the various colleges on both the upper and lower campuses we came, all bitten by the boniface bug.  We were subjected to considerable campus ribbing, but some of us survived.  A picture includes Professor Meek and Dean Betten, but unfortunately, Bill Needham, Harry Reynolds, and Charlie Peckham were AWOL at the round-up for the picture.  Some of these original twenty three entered with advanced standing and were destined to become members of the class of 1925.  Needham and Dunlap graduated in February 1925.  Joe Nolin joined us in February 1923; and in June 1926, there were nine of us who received our sheepskins, viz, Crandall, Dockery, Jennings, Marchand, Nolin, Olsen, Peckham, Reynolds, and Courtney.  Professor Meek began to surround himself with a staff that was to inspire and stimulate us.  There was a relationship of physics, B.T.U’s and K.W.H.’s to hotel engineering.  There was Louis Toth, with a night transcript and a morning report, teaching us to substitute the percentage of occupancy for the percentage of egg production; there were Jessie Boys and Lois Farmer giving new meanings to poached eggs or angel food cake; there was a Schuttie laughing at Jack Crandall and me as we shimmied up a hot steam pipe when a bull objected to being butchered and shook himself loose.

In those early days, we had our bull sessions; we dreamed and planned, as I suppose normal undergraduates always do.  We intended to conquer the world, specifically the hotel world.  We intended to organize corporations, to open new hotels, to really grab the hotel business by the tail and subdue it.  After and in conjunction with our food labs we were wont to get together for coffee and trimmings in an adjoining experimental kitchen under the watchful eyes of Madam Boys and Anna Driscoll.  At these meetings we dubbed ourselves the “Coffee Hounds.” Great were the plans of the Coffee Hounds in those days.

At these bull sessions of the Coffee Hounds the spirit of stick-together was germinated.  We swore mightily that after leaving Cornell we would remain united.  The alumni association which is now the Cornell Hotel Society was conceived in the sessions of these early Coffee Hounds.

In those days new community-sponsored hotels were popping up right and left, and as undergraduates of the newly organized hotel courses at Cornell we were privileged to be present and to participate in many of these openings.  Jessie Boys, “Madam Boys,” as we called her, was an honorary member of the Coffee Hounds.  From the postmortem discussions of our activities at some of the hotel openings, the idea was born, which under her stimulus and encouragement eventually became the first opening of Hotel Ezra Cornell in Prudence Risley Hall on May 7th, 1926 with Walt Bovard ’26 as the managing director.

It was intended by the original organizers that Ye Hosts should fulfill the functions that are now recognized as those within the proper sphere of activity for the undergraduate society, which is now named Collegiate Chapter of the Cornell Hotel Society.  I know that deep in the minds of the original organizers of Ye Hosts was the thought that a similar society should be organized among the alumni to hold them together after graduation.

At the organization meeting of Ye Hosts, Alfred L. Olsen ’25 was elected the first President with Jack Crandall ’25 and Bud Jennings ’25 as Vice Presidents and with yours truly as Treasurer, in which capacity I had my first experience in shaking everybody down for 50 cents in dues.

A committee was appointed to recommend a symbol for a key.  There were many heated discussions, but the symbol which was finally designed and adopted is still in use at the present day.  It had patterned after a sign made from and old weather-beaten board broken diagonally at each end hanging in front of an old English inn.

One of the first properties of Ye Hosts was to promote a Ye Hosts dance in the auditorium of Home Economics (the present Comstock Hall) at which a huge banner was hung.  The dance was a success, at least we thought so, and we were very proud of our banner and our Society.  This was probably the first materialization of notions which had been tossed back and forth among the Coffee Hounds for some time and was eventually to become the Hotel Ezra Cornell opening.

When the first class graduated in 1925, Ye Hosts society was still the undergraduate society of the Hotel School in which every hotel school undergraduate was ipso facto a member.

In the spring of 1926 the constitution of Ye Hosts was changed to make it an honorary society.  Seniors and juniors of the School could become members only by election.  At the same time, new “Cornell Hotel Association” was formed to take the place of the old Ye Hosts.

The first officers of the new Cornell Hotel Association were:

From the very beginning the alumni of the School were a very closely knit group.  As they had promised one another as Coffee Hounds, they maintained contact by means of letters, round robins, and in general leaving no opportunity lost to keep together.  Specifically, as many as possible would get together for a dinner on the Wednesday of the week of National Hotel Exposition in New York City held each November.  On Wednesday, November 16th, 1927, at such a reunion banquet at the Roosevelt Hotel, plans were definitely formulated for a permanent alumni association, John M.  Crandall ’25 being elected acting Secretary.

At the call of Mr. Crandall, School alumni met on Saturday morning, May 12th, 1928, in Willard Straight, for an organization meeting, and as a result the Cornell Society of Hotelmen was definitely and formally organized with the following officers:

History of the CHS Foundation

The Cornell Hotel Society Foundation (CHSF) is an organization composed of trustees who are serving as or have served as president of the Cornell Hotel Society (CHS) and a limited number of influential Cornell School of Hotel Administration (SHA) alumni who serve as elected trustees.  Together they work to strengthen the Society and provide support for programs serving the students at the SHA.

CHS Foundation was established by CHS in 1989.  Bill Keithan ’50 suggested the vehicle of a foundation to CHS, and with the help of Peter Panarites, Esq. ’54 (lawyer with a DC law firm focusing on Hospitality Law), developed its original Bylaws and once officially formed, served as its first chairman.  Bill Callnin ’56 assisted Bill in documenting and forming the organization and served as its first president.

The primary reason for the establishment of the CHSF was to create a structure to ensure the continuing interest and active participation of all the past CHS presidents in events and affairs of the SHA community.

Beyond their Presidential years, serving as CHSF Trustees, the past elected leaders of CHS can be called upon in numerous ways to assist the SHA at Cornell University, its Dean, Faculty, Staff and Students.  One of the most important ways that past CHS Presidents can help, working within CHSF’s structure, is to assist the SHA and the Dean raise their portion of University-wide campaigns.

A significant second reason for CHSF’s formation was to shift excess CHS funds (assumed to be approximately half of the then (1992) more than $700,000) to tax exempt status.  At that time, CHS leaders were concerned that these funds could be taxed as excess profits of CHS operations.

To date CHSF has provided over 1$Million in grants to students, CHS, and the SHA to support scholarships, building funds, and programs supported by the SHA.  CHSF has shared funding of the “Hotelie for Life” Student Prize with CHS, currently manages the Philippus Miller III “Hotelie for Life” Endowment, the Philippus Miller III Legacy Endowment, and the Jay and Peggy Treadwell Prize for International Travel, and is exploring additional programs of value to the SHA and its students.

Since 1928 The Society has served a very important role in the life of the ‘Hotelies’.  It is the original social network that brought the members together to pay it forward for our industry and all stakeholders of The School of Hotel Administration.

Under the current governing board the need for strategic direction and review of vision, mission and objectives were deemed imminent in order to ensure the Society kept its relevance and legacy in the field as The Alumni Organization to belong to.

A study was commissioned in 2012 to review other outstanding alumni organizations, their structures and best practices. The strategic direction is crafted in order to ensure the values, purpose and vision of The Society is clearly communicated and lived by its members.

“We are an engaged network of Dynamic, Imaginative Leaders Sharing Traditions, Friendship, Passions and Ideas. We believe that Life is Service and Creating Enriching Experiences for others is at the heart of being a Hotelie for life.”

The Society is a volunteer run organization by its alumni for its alumni.

The Society also promotes fellowship, networking, education, recruitment, career management, development, and financial assistance to students at the School, professionalism, and training in the hospitality industry.

Our shared passion for the art & business of Hospitality bonds us as an engaged network advancing the interests of SHA, its students and alumni worldwide.

Our dynamic, imaginative leaders worldwide come together to share tradition, friendship, passions and ideas.  The Society acts as the platform to connect alumni.  All the activities of The Society aim to live our motto ‘Life is Service’.

Throughout the year a variety of activities are organized by the individual chapters in order to help The Society live its mission.   The dues collected by the members help support a number of the engagement events in addition to the operation of this volunteer based organization.

This 60th Anniversary Booklet of EMEA was prepared by looking through old pictures and files to make a recollection of the greatness of CHS EMEA Region.  It is a tribute to the many CHS members who have helped the EMEA Region to become a strong base for Cornell and the Hotel School. 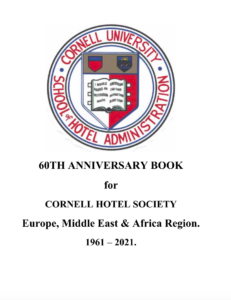