On Friday, June 25, the Cornell Hotel Society – Singapore Chapter hosted a farewell Zoom party for Bill Minnock ’79 who, after spending 7 wonderful years on the island, has relocated to pursue the next chapter in his life. Friends and family dialed in from all over the world – Germany, Hong Kong, Thailand, and Singapore – to honor his contributions to the chapter and reaffirm our love and support of him as an immensely generous and influential Cornell University School of Hotel Administration alum. 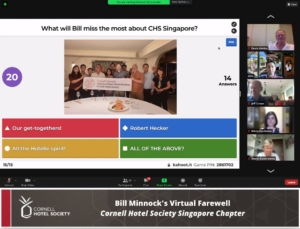 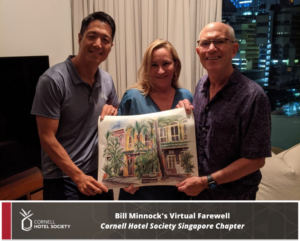 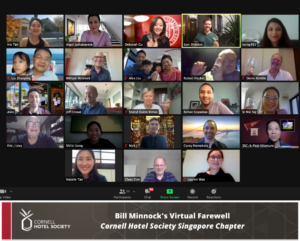 On Saturday night, September 7, 2019, Bill ’79 and Debbie ’81 Minnock hosted a reception at their home in honor of visiting CHS Global 2nd Vice President Ted Teng ’79.  Joining Bill, Debbie and Ted were the leaders of the local CHS Singapore chapter.

On August 30, 2018, CHS Global President Bill ’79 and Debra ’81 Minnock entertained the Singapore CHS Board and some chapter members at their house in Singapore.

On May 31st, the Singapore chapter held their Annual General Meeting – a yearly gathering to catch up on all things CHS, take a brief look back at the prior year, sneak a peak at the year ahead, vote on the next Executive Board and, most importantly, mingle with CHS family and friends over drinks and snacks. This year’s meeting was held at a fabulous new venue in the form of Andaz Studio, a showcase space of the upcoming Andaz Singapore hotel. The team at Andaz put on a great evening, spoiling attendees with world-class service, signature cocktails and hands-down best chicken stew in town.

Following the administrative portion of the meeting, the audience had the opportunity to learn more about the upcoming Andaz Singapore hotel and to interact with the hotel’s GM, Head Chef and other team members. Those in attendance also extended a big round of applause to the outgoing Regional VP, Jonas Ogren, in appreciation for his contribution, dedication and many years of service to CHS Singapore. The Regional VP baton was passed to Paul Kitamura, who will surely pick up from Jonas without skipping a beat.

The Best Chicken Stew In Singapore!

Food Buffet at The Andaz Studio