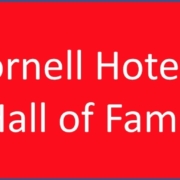 As we celebrate the 100th Anniversary of the Cornell Hotel School, the recently named Cornell Nolan School of Hotel Administration, it is also an opportune time to celebrate some of those who have powered the School’s brand for one hundred years.

The mission of the Cornell Hotelie Hall of Fame is to:

This is an annual event to be held immediately after the CHS New York City Chapter’s Annual Reception in November during the Hotel Show. Each year we will induct 10-12 Hotelies into the Cornell Hotelie Hall of Fame along with a Rising Star award to recognize early Hotelie successes.

The Nomination/Selection Committee selects the inductees each year and is comprised of members from different generations, geographic regions, and segments of the industry. The founding committee members are as follows:

The criteria for nomination/selection are:

For this inaugural class, the nominations were generated by the committee using many resources such as the two school history books and the 90th Anniversary Hotelie Magazine. We also solicited input from the CHS Global Board, the Council of Young Alumni, and the Cornell Nolan School of Hotel Administration leadership team. In the future, once this program is established, we plan to have a broader nomination/selection process engaging our CHS members and their local chapters.

The inaugural class of course is the most difficult one to make the selections. Alongside the 100th anniversary, the committee chose to include inductees from every decade for this first class. We literally have hundreds we could have inducted in the first class but that would not provide the proper recognition for each. We have one hundred years of Hotelie successes to celebrate, so it will take us a few years to catch up. I hope you will join us in celebrating this inaugural class and help us recognize many more Hotelies in the years to come.

The committee has chosen a very special inaugural class of 17 inductees representing the breadth of Hotelie successes over the past 100 years. The Hall of Fame inductees are:

The Rising Star award recognizes early Hotelie successes and this year the award goes to:

I have no doubt a sense of sorrow came over you when you read the name Roberto E. Wirth as he passed away suddenly. A month ago, I had a video call with him to inform him of this induction and sought his acceptance. He was very happy and honored. I did the video call with him so he was able to read my lips and I was able to see his smiling face. I hope you are comforted to know that he knew how highly he was regarded in the CHS community to be inducted into the inaugural class.

We will be sharing the inspiring stories of these inductees over the coming months before their induction at the November event.

Our sincere gratitude to the Nomination/Selection Committee members for their tireless work in composing an incredible inaugural class of inductees.