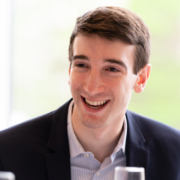 “Make people happy!” – This is the life lesson Ben Nelson ’22 learned from neighbor and comedian Esther Goodhart while growing up in New Jersey. This mantra has guided and inspired Ben throughout his academic and professional life and influenced his desire to establish a career developing technologies that enhance the guest experience in the hospitality industry. His passion for “making people happy” led him to the Cornell Nolan School of Hotel Administration where he earned the 2022 Philippus Miller III ‘83 Hotelie for Life® Prize.

In 2020, the Cornell Hotel Society (CHS) Hotelie for Life® Senior Prize was named in honor of Philippus Miller ’83, longtime director of alumni affairs at The Hotel School and founder of the executive search firm Philippus Miller III and Associates. Phil was famously known for facilitating relationships among Hotel School students, faculty, and alumni. He was the consummate Hotelie – a people-person dedicated to serving others.

Ben’s first exposure to hospitality was a high school summer job at the Alpine Country Club in Demarest, New Jersey. Despite being hired as a busser, his first assignment was making pancakes at the breakfast buffet. He loved meeting and interacting with the members and convinced his boss to promote him to a wait staff position. As a server, Ben flourished and thoroughly enjoyed providing great service.

Impressed with Ben’s performance, his manager suggested that Ben should study hospitality management. Upon investigation, Ben quickly learned that Cornell was the place to go. However, in a similar college admissions story to that of Phil Miller’s, Ben was initially rejected from Cornell University. He enrolled in the hospitality program at the University of Massachusetts at Amherst, and despite enjoying his freshman year at UMass, Ben reapplied to Cornell and enrolled as a second-year transfer. He was thrilled to have the opportunity to continue his hospitality education at The Hotel School.

At Cornell, Ben embraced his operations-oriented courses. A class on the cruise industry exposed him to a segment of hospitality that he did not know anything about, and it quickly became one of his favorite courses in The Hotel School. Ben also excelled in the Introduction to Hotel Operations class, and eventually became a teaching assistant for the hotel practicum portion of the course. Being a teaching assistant (TA) for an operations course during COVID presented a challenge since the class had to be taught online. Ben assisted the professor by reworking the previous in-class experience to be ‘Zoom-friendly’, including clips and interviews from his time working at the Conrad New York Downtown in Manhattan during the summer before entering Cornell. Outside of The Hotel School, Ben also took an introduction to American Sign Language course, proving to be one of his most challenging yet favorite courses.

When the Statler Hotel re-opened to the public after COVID, Ben was able to TA the Introduction to Operations course in person. It was during that time that Ben befriended a newly-hired deaf housekeeper from The Statler Hotel. When assigning students to pair with The Statler Hotel, Ben asked if anyone in the class knew American Sign Language. Sure enough, one first-year Hotelie had experience with ASL, which then enabled the deaf housekeeper to participate in the class and mentor a student for the first time.

In addition to his first summer college internship at Conrad New York Downtown, Ben’s other summer jobs complimented the operations courses he enjoyed and incorporated his desire to meld guest experience and technology. After his sophomore year, Ben worked remotely for the digital marketing department of Six Senses Hotels and Resorts. His assignment was to transform existing videos to highlight the brand’s key pillars and showcase the luxurious guest experience in a post-COVID era. During the summer following his junior year, Ben worked as a Digital Product Management Intern for Hilton, where he helped develop a guest facing messaging application that is planned to be rolled out at over 6,800 properties.

Phil Miller truly embraced the special relationships that have always existed between Hotel School students and alumni. During the fall of 2021, Ben filled in for one of the Dean’s Assistants to host Ryan McNamara ‘10 and Kristen McNamara ’10 as the Dean’s Distinguished Lecture Series speaker. At the time Ryan was Managing Director of The Plasencia Group and Kristen was an Executive Director at J.P. Morgan. Since that weekend, Ryan and Kristen have remained mentors to Ben, and as a true Hotelies have always responded to Ben’s inquiries. Ben has also benefited from attending CHS road trips to alumni events in New York City, as well as a CHS DC/Baltimore chapter event during his 2021 summer internship with Hilton.

Ben will begin his professional career with Accenture in the fall of 2022. He will be working in the New York office and hopes to explore the travel and tourism practice once on board. He would like to continue to pursue his passion of using technology to enhance guest experiences and make people happy.

Historically, one of the rewards for winning the Phil Miller prize was the opportunity to address the Nolan School of Hotel Administration graduating class during graduation. Unfortunately, that was not able to take place this year. When asked about the message he would have given to his classmates, Ben cited the following themes:

The Cornell Hotel Society and Cornell Hotel Foundation congratulate Ben, and wish him the best of success on his journey as a Hotelie for Life®. This interview was conducted by Robert Mandelbaum ’81. 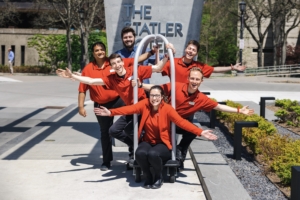 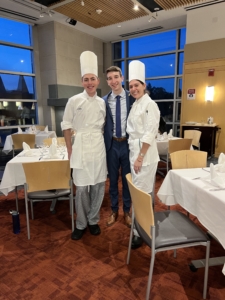 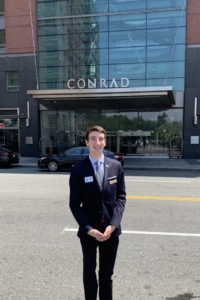