On Thursday, January 30, 2020, several Hotelies joined other Ivy League alumni at the Städel Museum in Frankfurt to view the “Legend of Van Gogh” exhibit. After the exhibit the group met for drinks and dinner at “Zum Gemalten Haus”, a traditional Apelwein restaurant in Sachsenhausen. 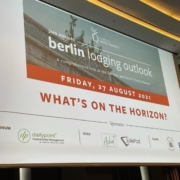 CHS Germany Get Together