Keep the CHS network in your pocket | DOWNLOAD THE APP | Available on: 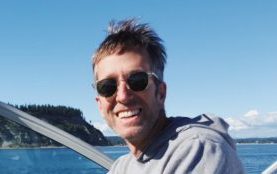 Daniela Bursztyn ‘19 had the chance to interview Mark Canlis ‘97, Co-Owner of Canlis restaurant in Seattle.

What is your story?

I grew up in Seattle. My restaurant is almost 70 years old. From a young age, I was part of the operation. I never thought I was going to go into the business since we were actually encouraged to do the opposite. I was told to explore the rest of the world.

After Cornell, I went into the military for the next four years. Then, I moved to New York City for a couple of years and worked for Danny Meyer. In 2003, I went back home to take over Canlis, and then my bother joined me in 2005. We have been running Canlis ever since.

What advice would you give to anyone who is an aspiring restaurateur?

I would remind them that this job is mostly about leadership. It is not about food, beverage, service, ambience, or any of those things. It is principally about leading people. In order to lead people, you have to be able to lead yourself. Ultimately, when I see restaurants fail, it’s because I see leaders fail, and leaders fail because they fail personally. They could cook their hearts out or have created an awesome concept, but if their personal life is a wreck and they go down with it, so does their company.

People who are just leaving Cornell tend to focus on what it takes to build a restaurant or what it takes to become a great chef. Those are all foundational, but the next level would be gaining leadership experience and try to understand what kind of leader you are. What are you hopes and dreams? Who do you want to become? What do you want people saying at your funeral? Hopefully, they are saying something more significant than “wow she opened an awesome restaurant.” Hopefully, they are talking about your character. This is a game of leadership, in which you must inspire people and become the kind of leader worth following.

How was the transition of taking over the business from your parents? Why do you think your restaurant has been so successful?

No matter how close you are as a family, transition is very hard. Our transition was definitely tricky. What made it successful was that we agreed on the values of the company. When you are taking over a business, there is only one person “steering the ship”, and that person has to be part of the next generation. At the same time, you need the blessing, support, encouragement, and accountability of the former generation. One of the reasons that we succeeded was because we figured that stuff out early on. The rest is just details, hard work, creativity, and commitment that you will figure out challenges as you go. I still don’t know what I’m doing, but I’m better at it now than I was fifteen years ago. You have to get used to that feeling.

What was your favorite part about The Hotel School?

The people. I think the relationships that you develop during your time at The Hotel School are so important. In my opinion, the relationships you make are more important than the academics. What is the quality and caliber of those people? Who are they and how are they pushing you? College is an incredible opportunity to meet a few special folks. Those relationships might go with you your entire life. I had a lot of friends, but I have only stayed in touch with about three or four in a meaningful way. They have shaped who I am as a person and how I run my company.

What was the most valuable class you took during your time at Cornell?

The most valuable class I took was Professor Snow ‘s communications course that was all about writing and public speaking. I use the skills I gained from that course basically every day.

What would be your recommended path after graduation?

If you get a job at an amazing company and your boss is a jerk, you are wasting your time. All you are learning is how to be a jerk. You want to work for someone who is inspiring, who you love as a person, who is a leader in their community. You need to find that person and go work for them. It doesn’t matter if it’s for free. You have to learn how to lead. You are not going to get that from some fancy company. You are going to get that from a person inside in a fancy company. Learn from someone who is inspiring to you. That is what is going to fire you up.

Who do you admire, and why?

I admire Randy Garutti, who is a Cornell alumnus on the Board of Directors of Canlis. In fact, he was my roommate at Cornell, worked for Danny Meyer, and later became the CEO of Shake Shack. Randy has a sweet, delicate combination of being “all heart”, but also fierce, which is hard to find.

Randy has taken Shake Shack from one burger store to 150-200 stores. Most people could never do that. All the way along, he has honored his wife and has raised three incredible kids. He’s maintained important relationships and is also active in his community. Everyone likes him as a human being and a leader. There is only a handful of these types of people on the entire planet.

What has been the hardest challenge of balancing restaurant life and family life?