On May 9th, the Hotelie for Life® Senior Prize finalists and winner were honored at a luncheon at the Statler Hotel. Madison Austrich ’19 was the recipient of this year’s award and had the added honor of addressing the class of 2019 at graduation this past weekend. In addition to monetary awards, each student also received a lifetime membership to CHS. 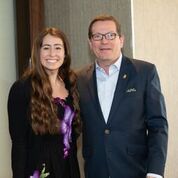 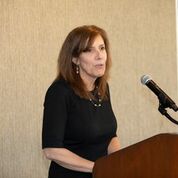 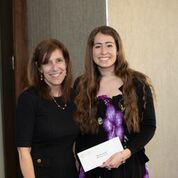 The Hotelie for Life® Prize (formerly known as the Joseph Drown Special Prize) is awarded to a Hotel School senior that has demonstrated academic excellence, extracurricular leadership, entrepreneurial spirit, social responsibility and well-conceived career goals and aspirations. The award is sponsored by the Cornell Hotel Society (CHS) and the CHS Foundation.

At the Saturday night banquet of Hotel Ezra Cornell 93, Ms. Kayti Stanley ’18 was announced as winner of the 2018 Hotelie for Life® prize. Kayti is a Hotelie that meets, and exceeds, all the stated requirements of the award.

Kayti was born and raised in Friendswood, Texas, a suburb of Houston. Like most Texans, Kayti participated in many football tailgates which kindled her love for people, food, and hospitality. Despite coming from a split Aggie/Longhorn family, Kayti emphatically states that she bleeds orange all the way.

When looking at colleges, Kayti said that she, “wanted to get out of Texas and have an adventure.” Friends of her grandparents attended Cornell, and knowing Kayti’s appreciation for hospitality touted the great virtues of the Hotel School. She recalls her first visit to campus. It was a snowy day, so her parents stayed back in the hotel. Kayti persevered through the snow, and even got a chance to see the Dragon Day parade.

Kayti was also fortunate to have Lee Pillsbury ‘69 walk in on her prospective student orientation session. After hearing Lee’s passionate description of the contributions and successes of Hotelies while on campus, and after graduation, she was sold on becoming a Hotelie for Life®.

In addition to achieving great success in the classroom, Kayti has been involved in numerous extracurricular activities. She has served as a teaching assistant in multiple classes, tutored students, and served as a Dean’s Student Assistant her senior year. One of her most enjoyable experiences was her involvement with the Mortar Board Der Hexenkrieis Senior Honor Society which provided her the opportunity to meet student leaders outside of the Hotel School.

Because of her love for Cornell, Kayti wanted to become involved in the new and prospective student experience. “You only have four years on campus, time here is so precious and there is never a lack of opportunities. Make the most of it. Cornell is a place to succeed and fail comfortably. Don’t be afraid to make mistakes,” she advises. Accordingly, Kayti has served as a Hotel School ambassador, a leader on the University’s Orientation Steering Committee, and as a Campus Tour Guide where she learned to walk backwards and talk at the same time. (Editor’s note: You want her on your Cornell trivia team.)

Kayti’s thoughts regarding her career path have changed from year-to-year, influenced by all the new professors and classes she got exposed to. Over her four years her career interests have gone from banquets and events, to hospitality design, to technology. “Try everything and see what you are passionate about” is one of her mantras.

After graduation, Kayti is going to take a few months off and then begin her career in Dallas with Deloitte. She has attained the position of Business Analyst in the Strategy and Operations Consulting Group. “I’m not exactly sure what businesses I will be working with, but I hope to focus on bringing people and service practices into industries where that culture does not currently exist,” Kayti says.

As winner of the Hotelie for Life® Prize, Kayti has the honor of addressing the faculty, parents, family, friends, and her fellow classmates at the Hotel School commencement ceremonies. When asked what her parting words will be, Kayti responded, “I don’t care for endings, but I do really like beginnings. I plan to speak about the importance of gratitude, and how what starts at the Hotel School is just the start for each of us.” Similar to the advice she has given to numerous new and prospective students, she wants to tell the 2018 class of Hotelies that, “the future is going to be full of challenges and successes.”

How is Kayti going to remain a Hotelie for Life®? “I was wowed by the alumni events I got to attend in Chicago, New York, and Los Angeles. I am so excited to become active in CHS.” Kayti also hopes to return to campus as a guest speaker, and continue to advise students as she has done for the past four years.

“Gratitude is an important value to have. I am extremely grateful for my time at Cornell, and what is to come,” Kayti concludes.

Kayti’s speech during the May 2018 SHA graduation ceremonies can be found here:

The Cornell Hotel Society and Cornell Hotel Foundation congratulate Kayti, and wish her the best of success on her journey as a Hotelie for Life®. This interview conducted by Robert Mandelbaum ’81.