During her speech at the May 2019 School of Hotel Administration (SHA) graduation ceremony, Madison Austrich ’19 asked her fellow graduates to be mindful of the moment. By remembering graduation day, her fellow Hotelies will have this occasion of pride and accomplishment to draw upon to gain confidence during future challenging professional or personal events. Providing advice and preaching mindfulness are two of Madison’s many passions she practiced during her four years at Cornell. In fact, it was receiving advice from Kayti Stanley ’18 (the 2018 Hotelie for Life® Prize winner) during her freshman orientation that ignited Madison’s confidence to become a leader while on campus.

Madison had the honor of addressing her classmates at graduation as the 2019 winner of the Hotelie for Life® Prize (formerly known as the Joseph Drown Special Prize). The prize is awarded to a Hotel School senior who has demonstrated academic excellence, extracurricular leadership, entrepreneurial spirit, social responsibility and well-conceived career goals and aspirations. The award is sponsored by the Cornell Hotel Society (CHS) and the CHS Foundation.  (Note: Click on picture to listen to Madison’s speech)

Madison’s first contact with the Hotelie network came during high school in Florida. The parents of a member of her crew boat were both Hotelies. From them she learned that she could have an education and career in hospitality. After visiting campus for the first time and interviewing with Brad Walp, Madison returned home and immediately submitted her application for early decision to the Hotel School. A few months later, Madison was excited to turn down rowing scholarship offers from other universities, including The University of North Carolina at Chapel Hill, when she received her acceptance letter from Cornell.

When arriving in Ithaca, Madison assumed her life would be led by crew. While her teammates on the crew team helped her tremendously during her freshman year, Hotel School related activities shortly began to dominate her time on campus. Appreciating the benefit she received during the orientation process, Madison joined The Hotel School Ambassadors. Her interest in the new student experience eventually led her to become President of the organization her senior year. During her time as a leader she dramatically changed the process for selecting ambassadors, focusing more on the sincerity of the applicants, as opposed to their resume.

Besides excellence in the classroom, Madison was involved in several extracurricular activities beyond The Hotel School Ambassadors. All told, Madison was an active participant and leader in 13 different student organizations and successfully competed in four case study competitions. Three other organizations helped shape Madison more than others, and vice versa: Hotel Ezra Cornell, The 180, and serving as a teaching assistant.

When asked what it means to be a Hotelie for Life®, Madison reverted to the motto that binds all Hotelies – “Life is Service”. For Madison, service goes beyond the traditional examples cited within the hospitality industry. Madison appreciates the day-to-day interactions with people who provide joy to others with a smile or a thoughtful response to the question, “How are you doing?”

Grounding Madison’s diverse and successful time at Cornell was her belief in mindfulness. When she began to prepare her graduation remarks, mindfulness was just a small part of the speech. Then, while reviewing her text with Professor Amy Newman, it soon became evident that mindfulness needed to become more prominent to deliver a passionate and sincere message. For Madison, mindfulness trains your brain to “enjoy life while it is happening. Once you’ve experienced something mindfully, you can always go back to that.”

Madison must have a highly trained brain. She had a lot of enjoyable and successful experiences at Cornell to be mindful of.

The Cornell Hotel Society and Cornell Hotel Foundation congratulate Madison and wish her the best of success on her journey as a Hotelie for Life®. This interview conducted by Robert Mandelbaum ’81.

More Stories About Our Amazing Students

The CHS Foundation Treadwell International Experience Prize is yet another way Jay (‘61) and Peggy Treadwell are displaying their generosity and commitment to Hotel School students.

On May 9th, the Hotelie for Life® Senior Prize finalists and winner were honored at a luncheon at the Statler Hotel.

In May of 2017, Ms. Giovanna Cavagnaro ’17 was announced as the inaugural winner of the CHS Senior Prize. 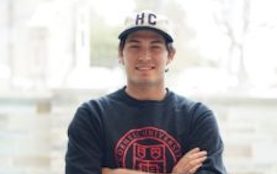 Andre Guacelli ’19 interviewed Henry Foote ’17 just before his graduation from the Hotel School.

Mona Anita Olsen ’04, assistant academic director of the Pillsbury Institute, worked with Saniya Gandhi MBA’15 to conduct the research for the engagement tool.

Building a powerful network is a vital part of any Hotelie’s success in the hospitality and travel industry.